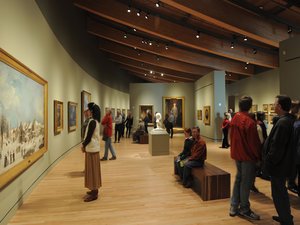 What’s causing all the buzz about Bentonville, Arkansas?  No longer a “small town,” this relatively small city is the home of the new globally ranked Crystal Bridges Museum of American Art, the 21c Museum Hotel, award winning restaurants, art galleries and festivals of every kind.

Today, it is an epitome of opposites. This rapidly growing town of 50,000 is home to Walmart Stores, Inc. Yes, the largest retailer in the world founded and kept its home office in Bentonville, a most unlikely place. Headquarters for businesses even half this size are typically reserved for cities like New York City, Los Angeles and Chicago.

Walmart is not only a force throughout the world, but it also has a tremendous presence in its own hometown.

Speaking of Walmart, another unlikely entity located in the city is the new, world-renowned Crystal Bridges Museum of American Art. The museum was founded largely through the efforts and financial support of Alice Walton, the youngest heir to the Walmart fortune.

With an endowment of $1.2 billion by the Walton Family Foundation, Crystal Bridges has almost instantly joined the ranks of some of the richest museums in the country. Though only opened in November of 2011, it has attracted over 1 million visitors and is listed among the top museums in the world. The bedrock of Middle America is not typically where museums of this stature are located.

World-class art is housed in a magnificent structure regarded around the globe as an architectural masterpiece. The museum’s glass-and-wood design, with its gently curving pavilions, is nestled around two spring-fed ponds. Designed by Moshe Safdie, Crystal Bridges is regarded as America’s newest cultural institution.

Bentonville retained its charming small town feel until the Crystal Bridges opening in 2011. It has since morphed into a booming cultural municipality, with a trendy downtown square littered with independent upscale restaurants and unique galleries, boutiques, and specialty shops of every kind. Hotels are popping up throughout the area making for a comfortable and pleasurable stay.

There are many hiking and biking trails around the downtown and museum areas. Have a bite to eat at one of the old or new restaurants, and then take a leisurely stroll around the quaint and beautiful town square.

Click Here to Hear What the Bentonville Locals say..